Skip to content
It took me almost two months to get through the Novacom saga. When it originally aired, it took two years. The episode 'Opportunity Knocks' introduced a broadcasting company called Novacom, a representative from Novacom named Arthur Dent, and a radio tower on Tom Riley's property. It took forever for the pieces to fall together. 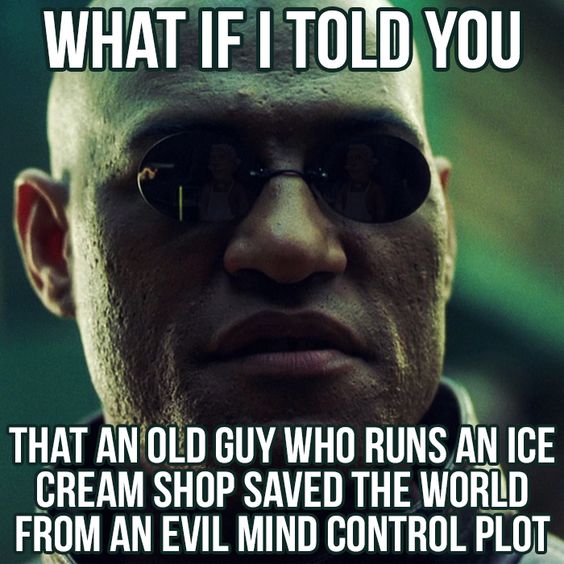 I was constant suspense and I was listening to an episode every day! Imagine those poor people who had to wait week after week.


(after listening to 'Opportunity Knocks)

Person listening in 2000: Hmm. This is probably gonna develop into something. I guess I'll just have to keep listening.

Me: Hmm. I'll see where this is going by looking it up on AIO wiki...reading...mind control?! No way!

(after listening to 'Red Herring')

Person listening in 2000: Who is this AREM? Is he a good guy or bad guy? And why would someone want to put a modem in Whit's office?

Me: Back to AIO wiki...oh, alright. Mitch is AREM. Mitch, why are you having kids foil Novacom's evil plans? Ohh...we haven't heard the last of the phone chick...WHAT? SHE DATES JASON. I HATE HER.


That's pretty much how I went through the whole saga. I was reading the plot synopsises as I listened to the episode. (I know. I'm a terrible person for cheating) Let me just say this, it's better to listen than read.

It's hard to criticize the Novacom saga because I think that it was very well written.

Let's start off with my main problem: the fact that Novacom was going to enslave the human race with mind control.

'Mind control' is just one of those phrases that makes me twitch a little. It's on the same level as 'aliens', 'we're killing the environment', and 'it's all white people's fault'.

Granted, everything that I listed can be justified to extent. I won't deny that there has been some unexplained phenomenon that could be connected to aliens. I recognize the fact that mankind has often abused the environment and that's wrong. And sure, white people have been horrible throughout history but they aren't the only offenders. So, what I'm saying is that mind control has a place at the justification table. (Where did you pull that metaphor from, Vic?)

There have been a number of mind control experiments over the years. (Mind you, some of the websites I'm reading would not be considered 'credible sources') I accept the fact that it's possible and has probably been done before. Could it be perfected to enslave humanity? I seriously doubt it...but hey, I'm only a high schooler. I'm not a scientist. What do I know?

I know that the whole mind control part of the Novacom Saga was a pretty big part, but it didn't matter that much to me. Sometimes, you just gotta go with a plot and not think about it too much.

The writing of the characters was very good. It brought out people's bad sides and good sides while some characters grew up a bit. Connie matured, Eugene grew up too, we (once again) saw how angry Tom could get, Aubrey became a Christian, Mitch and Connie had a complicated relationship, Jason made mistakes, and Monica Stone was more than just a one dimensional 'bad guy'.


Connie and Mitch are just lovely. I love their chemistry, their messed up relationship, and how they interact with each other. They were definitely one of my favorite parts of the Novacom saga.

I also really liked the Jason/Monica angle. It shouldn't be a surprise that I like whatever Jason does (Man, I'm obsessed) but I did not expect to like Monica. At first, I hated her. I won't lie, I was actually wishing that she'd get shot or something. Over time, I warmed up to her. She still committed various crimes and deserved to go to prison. I just liked seeing that when she realized she had been lied to, she stepped up and told the truth, even if the truth landed her in jail. I really did hate her at first though.

SIDE NOTE: I was reading some fan reviews on AIOHQ and some girl named Emily B. said this: 'One thing I am wondering about is how Jason could have become a good undercover agent in the past when he is always falling for women?' That's a freaking awesome comment. I laughed so hard when I read that.

I read some other fan reviews and they're a bit harsh towards the characters. They criticize the fact that Jason fell for Monica so easily, there was a lot of complaining about Connie's immaturity in her and Mitch's relationship, and some hated that the writers went all serious for the Novacom Saga

Adventures In Odyssey All Episodes

I think that most of the points made on the website (and other message boards) are fairly valid. Although, most can be defended.

First; Monica pretending to be an actual person named Paula. Paula had actual mission experience and legitimate credentials. Monica just stole these credentials. Why be mad that Jason was attracted to Monica? He had no reason to believe she was a spy.

Second; so you think Connie and Mitch's relationship brings out Connie's immaturity? I can see the justification for that. Look at the episode 'Secrets'. She tried to change herself to earn Mitch's affection. That's pretty immature but it's a fairly common thing to do in that in relationships. We're insecure by nature because we are sinful, fallen people. Insecurity and immaturity are as natural to us as breathing. The writers were making her character real and we should be commending that. Also, aren't you people forgetting that Mitch was Connie's first real boyfriend?

Third; Odyssey has always been able to balance out the episodes nicely. There are episodes about government conspiracies, mind control, and biological terrorism but there are also episodes about Jimmy Barcley playing too many video games, Connie ordering too many napkins for the shop, and Wooten contemplating about removing his internal organs so he could loose a bit of weight. The whimsical episodes and serious episodes balance each other out.

That brings me to my last point. I love that AIO is a mix of lightheartedness and maturity. The show has great writers, fantastic actors, and is incredibly enjoyable. Just keep in mind that all these things wouldn't mean anything if it never came back to Christ and the Gospel. The Christian message is the reason Odyssey has lasted 25 years and why it means so much to me.

Stories In The Novacom Saga

Throughout the Novacom saga, we were constantly told to not put our faith in ourselves but in God. Everybody-from grade schoolers to adults-should be reminded of this daily. I enjoyed the ups and downs of the Novacom saga but the most satisfying part was the reminder of our helplessness and God's everlasting strength and love for us.