The EMD F40PH is synonymous with the Amtrak era of American passenger trains. Although it has been retired from Amtrak service, it operated for over 20 years. It continues to be the motive power for commuter railroads all over the United States. Over 400 F40PH locomotives have been manufactured by EMD in various configurations. 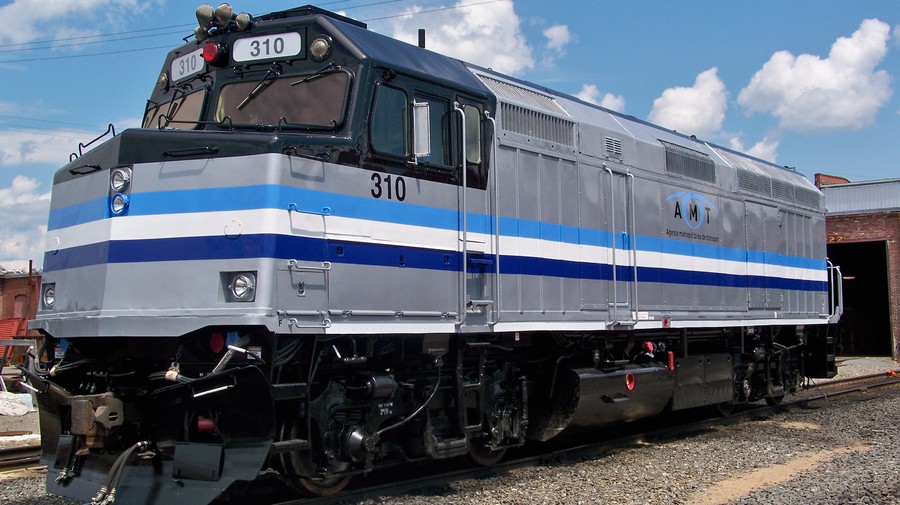 This F40PH model was the third in a series of nice looking, decent running and (most importantly) affordably priced Life-Like locomotive models (all manufactured in China). Throughout the 1990s, the same basic chassis design employed in this model would eventually be recycled (more or less) in numerous other 'wallet friendly' Life-Like models - GP38-2, F7, BL2, FA-2/FB-2, and GP18. It was a good niche for Life-Like at the time - filling the void between Bachmann's line of cheapie trainset junk and the nice-but-expensive offerings from Atlas and Kato.

The chassis is all plastic and quite light. Ala-carte weights plunked atop each of the truck towers provide most of the model's weight. The motor is an open-sided, skew-wound, 5-poler. All eight wheels are geared and provide pickup (no traction tires). Current is transferred from the trucks to the motor via miles of wiring (two wires per truck). All gearing is plastic. The driveshafts are plastic with springs in the middle. Couplers are truck-mounted Rapidos (open pilots). A non-directional headlight sits underneath the forward chassis weight. The wheels are blackened. They're also low-profile, so no problems on Code-55 track.

Now, I'm not going to blow smoke up your skirt and try to tell you that these models are even in the same ballpark as an Atlas or a Kato (either in looks or performance). But for what they are (affordable), they're quite respectable. They're not noisy, throttle response is smooth, pulling power is good, pickup is great (no stalls), and slow-speed creep is nice (although the top-end speed is off the charts). Shell detailing and paint aren't terribly fine, but for what they cost (about a third the cost of an Atlas or Kato model of that era), they were a good value (especially as compared to the godawful offerings from Bachmann and the like).

Ironically, these models employ virtually the same chassis/mechanism design used by Model Power/Mehano in some of their late 1980s diesel models (C-420, et al). Not surprisingly, performance is quite similar.

This model was available up until around 2000, at which point Life-Like starting dropping all of their economically priced diesel models in favor of higher-end offerings.

To remove the shell, simply spread the sides apart and lift (don't forget to finagle the front coupler through the pilot).

Reviewed: 4/91 Model Railroader ('The model compares well to drawings and photos... except that it lacks about 6' in height. The body is crisply molded with lots of detail, and the paint and lettering are superb... Especially impressive are the cast-in windshield wipers and the exquisite five-chime horn. One weak area is the fuel tank, which looks like a flat box and nothing like the real thing. Life-Like ships its models lightly lubricated, so you can go straight from box to track and start running them. There's no chance for the lubricants to dry out or cake, as the inventory is churning so well that the model is only a few months old when you buy it... Inside you'll find a five-pole, open-frame motor with a skewed armature. The motor is double-ended with drive shafts that are in fact springs. In theory, these should make for smoother running than solid shafts would... The trucks are held in by easily removed pins. All wheels driven- none have traction tires - and all pick up electricity and transmit it to the motor via wires. Massive cast weights make for good tractive effort. The wheels appear to be nickle-silver that has been chemically browned to better resemble the prototype. At .030' the flanges are considerably beyond the .022' NMRA standard. Our F40PH was a relatively smooth-running unit that performed nicely throughout its speed range. Its starting speed was a bit on the high side, but I'd expect it to drop after the unit is run in... It will definitely handle the 8 cars per unit of the typical Amtrak assignment. This is a good-looking and nice-running model and a welcome addition to the N scale fleet. Amtrak, CalTrain, New Jersey Transit, Undec. Price: $29.98')

Pemco’s EMD F40PH diesel locomotive model appears to take its inspiration from Life-Like’s example. When compare the shells, you’ll find Pemco’s model does sport some variations from Life-Like’s effort. Most notably is the inclusion of a pair of non-prototypical classification lights on the unit’s nose. Over the years, only Amtrak and Burlington Northern models are known to exist from Pemco for its HO-scale F40PH diesel release. Pemco listed Santa Fe and Union Pacific in the company’s only product catalog, but those examples are not thought to exist. Of additional note, Pemco’s Burlington Northern F40PH serves in what may be the company’s only train set offering.

Reviewing Pemco’s shell, one would note it as a close relative to the Life-Like F40PH tooling. The design of the front and rear pilots, the strobe lights and details above the cab on the engine’s roofline, the two tab slots cut into the side of the unit to attach the underframe, as well as the underframe carrying the fuel tanks all mimic Life-Like’s work.

As with other Pemco clones, the F40PH is not an exact clone of Life-Like’s unit. Pemco’s model features an odd pair of the classification lights located on the lower portion of the unit’s nose. These lights are not found on Life-Like’s shell. Another interesting addition found only on Pemco’s shell is tread pattern on the walkway of the rear platform. 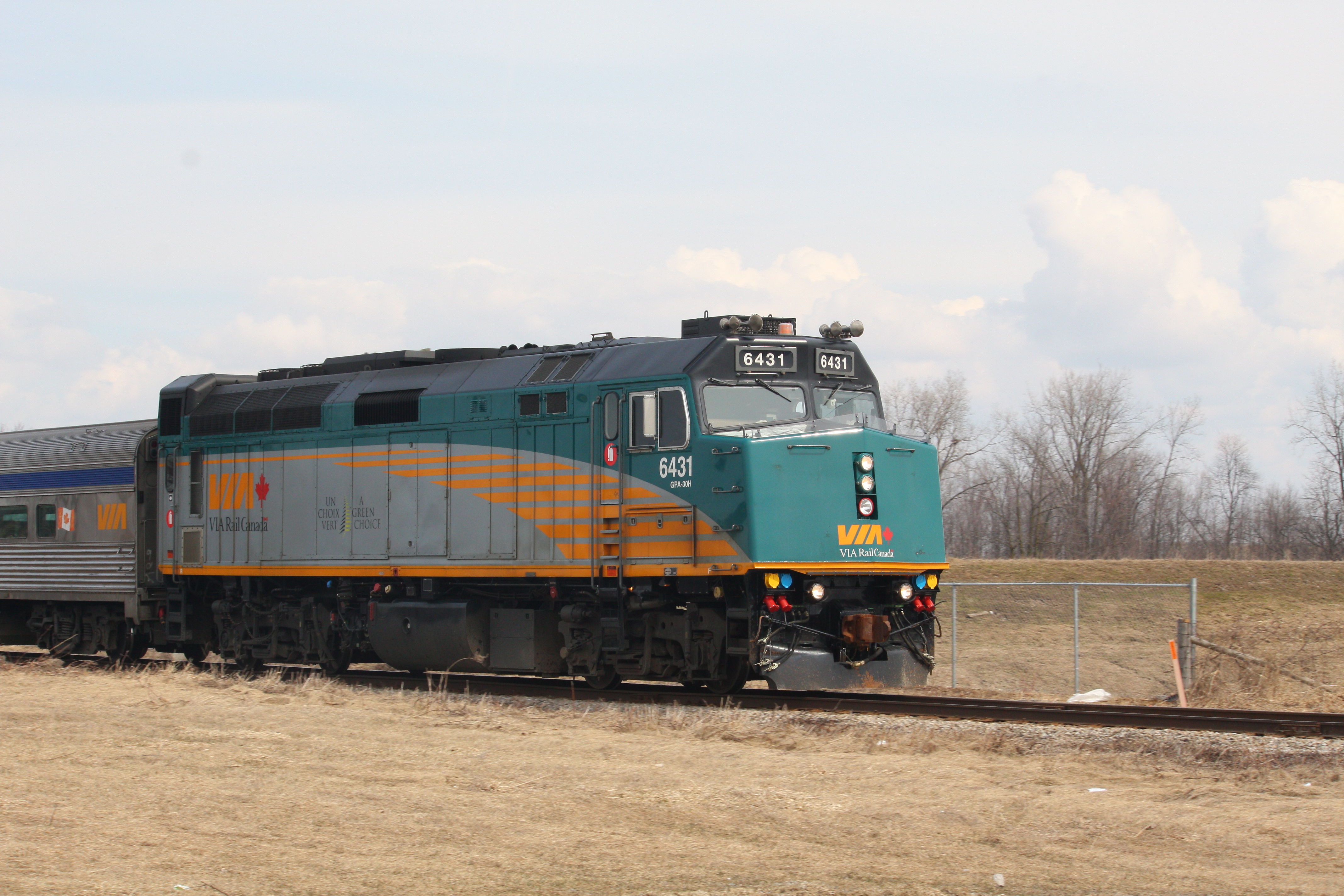 The drive unit is typical of those found on Pemco offerings. One truck is powered by a sidewinder pancake motor located above the wheels. The bottom of the fuel tank reads “F40 DIESEL LOCO NO.3301 PEMCO MADE IN HONG KONG.” Both trucks feature talgo couplers.

Pemco’s instruction sheet refers to this unit as an “FP-40.” The sticker on the box of my BN F40 also claims the unit is an “FP-40.” Pemco’s catalog does correctly refer to the unit as an “F40PH.” Undecorated examples were produced by Pemco for its Alco 430 and SD-35 models and could possibly exist too for the F40PH, but have not been found to date.

From samples appearing over the years, research indicates there is only this one production example of the Pemco Amtrak F40PH. The back of Pemco boxes and the company’s one known catalog display what appears to be the 1970s Life-Like F40PH decorated with Amtrak’s Phase II paint. Pemco’s production model includes Amtrak’s red-nose Phase I paint scheme.

Note the backwards “BN” logo in the photo above.