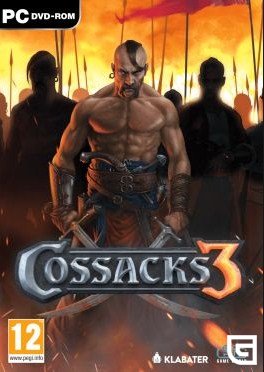 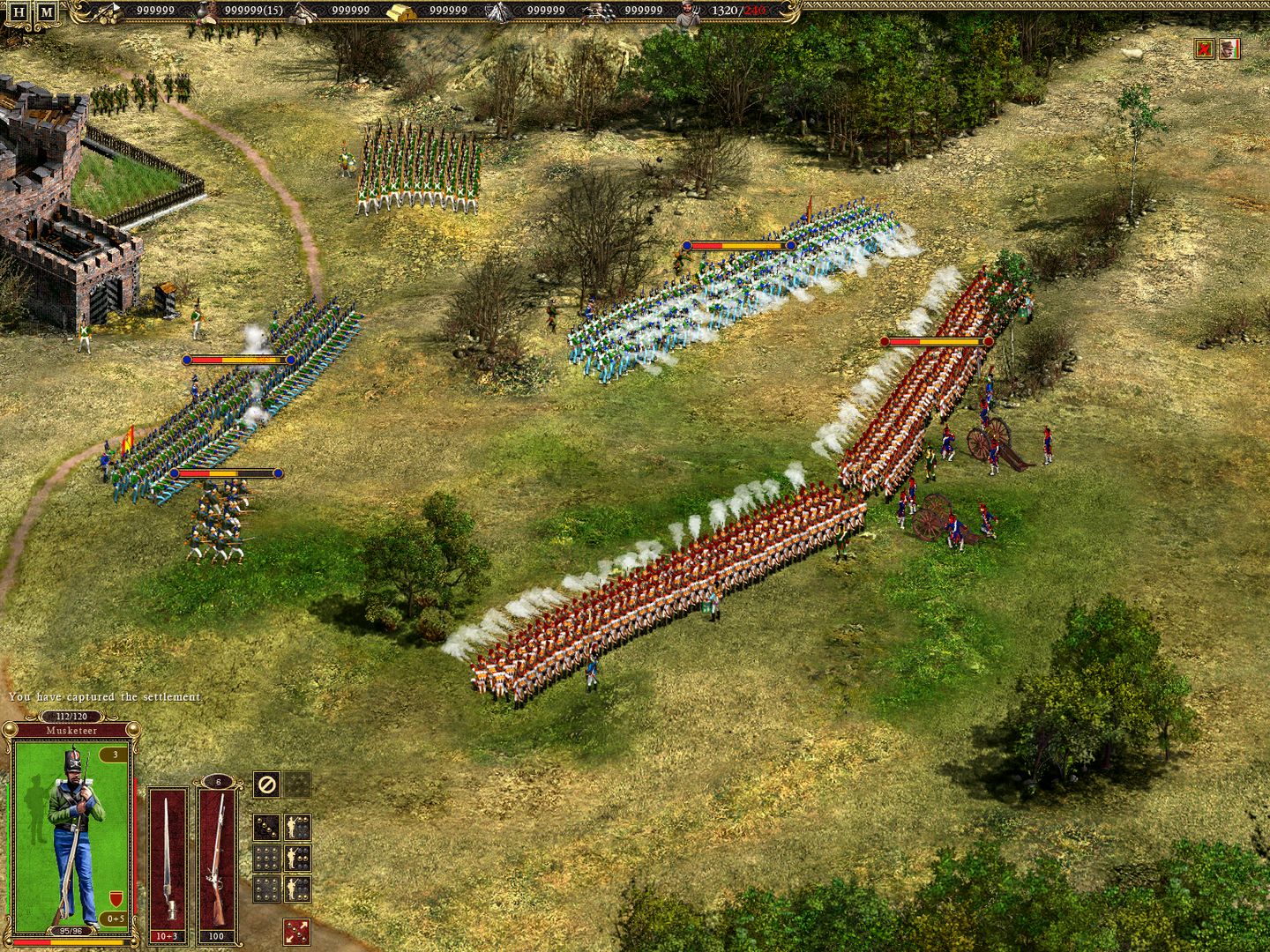 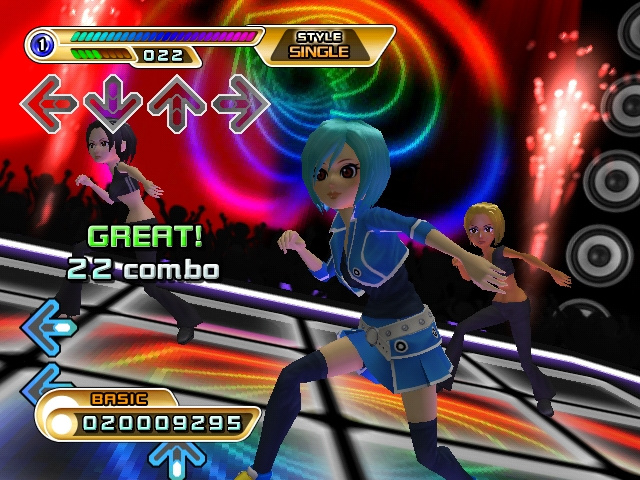 Cossacks: European Wars (2001): Cossacks: European Wars is a historical real-time strategy based on events of the 16th through the 18th centuries in Europe, when nations and states were created and demolished, and wars shed seas of blood. There are 16 nations or regions in Cossacks: Algeria, Austria, England, France, the Netherlands, Piemonte, Poland, Portugal, Prussia, Russia, Saxony, Spain, Sweden, Turkey, Ukraine, and Venice. Each has its own original graphics, economic and technical development peculiarities, military advantages and drawbacks, and unique units and technologies, providing vast choices of tactics and strategy in war against any enemy. Thus, England is the mightiest sea power, Austria has powerful light and heavy cavalry, and Cossacks are the pride of the Ukrainian army.
Battles of up to 8,000 units may be conducted on single or network game maps. One can carry out lingering city sieges, wage guerilla wars, capture commanding heights and arrange ambushes, deploy landing forces on enemy shores, and conduct sea battles. The game system is arranged to reduce per-unit control and resource micromanagement, and to turn to global goals of powerful economy formation, science development, the capturing of new lands, and defending borders. 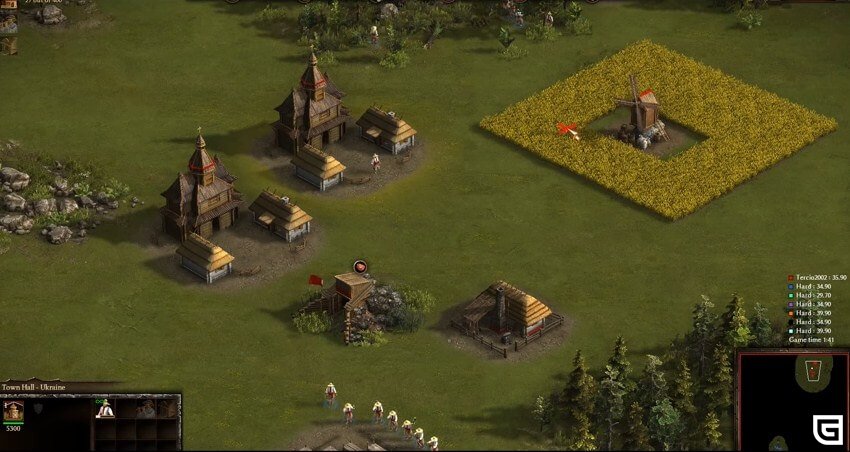 Cossacks: Back To War (2002): To stand alone in war is extremely unpleasant. Extremely pleasant, on the other hand, is the stand-alone version Cossacks: Back to War. Containing all of the gameplay features of Cossacks: European Wars and Cossacks: The Art of War, this is a complete care package for all current and future Cossacks fans. This add-on contains 100 captivating missions taking place between the 16th and 18th centuries. In addition, two new nations, Switzerland and Hungary, are included. These countries waged war in the late Middle Ages and essentially influenced the development of European military strategies. This addition causes the second add-on of Cossacks to pass the threshold of allowed gaming fun.

Cossacks II: Napoleonic Wars (2005): In Cossacks II: Napoleonic Wars , lead your 19th century army to glory in this much-anticipated sequel to the internationally acclaimed Cossacks: European Wars. Whether fighting as Napoleon's highly disciplined 'Grand Arme', the tenacious Russians and their Cossack horseback warriors, the Austrians, Britons, Prussians, or Egyptians, the challenges will be daunting as you master weapons and tactics during a time that redefined modern warfare.

Cossacks II: Battle for Europe (2006): Let the battle begin! The Cossacks II: Battle for Europe add-on continues the renowned Cossacks II:Napoleonic Wars game. It depicts the rather short historic period of the Napoleonic wars. The Napoleon wars changed Europe forever, leading to the formation of empires and putting an end to almost one thousand years of constant strife between small states. The game provides mass-scale battles between thousands-strong armies of the nations involved in conflicts during this period. The theatres of operation introduce France, Britain, Austria, Russia, Prussia, Egypt, and three nations not represented in the original game – Spain, the Grand Duchy of Warsaw (Poland), and the Confederation of the Rhine.
The Cossacks II: Battle for Europe reconstructs in detail the soldiers' uniforms weapons and architecture of each nation. Each nation's army has its unique units and possibilities. The game includes over 180 units 190 buildings and 1200 flora and fauna elements. When developing the combat system the peculiarities of early 19th century warring were taken into account as was the value of formations provisions and troop morale. Tactical tricks utilized by military commanders of the time are fully reflected in the game. An 'honest' system of bullet and cannonball ballistics based on physics is an innovative addition to the Cossacks engine. Other engine features include 3-dimensional landscaping which creates realistic-looking scenery and towns and impacts combat tactics. For example the firing range of a subdivision of soldiers or a cannon positioned at the top of a hill is greater than the firing range of a unitstationed on flat terrain.

Fans of the Cossacks series are plunged back into the 19th century environment of Cossacks II: Battle for Europe where nations just await conquering. The game encourages players to explore the diplomatic and economic aspects of warfare, as well as the militaristic. Players must use all the assets available to them, natural resources as well as brave soldiers, to turn the tides to their own favor.

In Cossacks II: Battle for Europe, campaigns and scenarios follow historical and hypothetical storylines in which players will choose one of nine nations including Spain, the Rhine Confederation, and the Great Duchy of Warsaw to relive the battles of Waterloo, Leipzig, and Borodino. Ten battlefields, four campaigns, six skirmish missions and three historical battles face the war-ravaged basement battalion commander. 'Battle for Europe,' 'Battle,' and 'Skirmish' modes will all be playable online over LAN or Internet.

Cossacks II was a solid Napoleonic RTS with a distinctive wargame flavor, and one rather big, rather annoying flaw: musket-equipped formations would only fire if you personally gave them the order. Yes, in what has to be one of the most eccentric game design decisions since EA put Michael Owen on the cover of Medal of Honor: Rising Sun, GSC left-out unit behavior stances altogether, forcing flustered generals to reach for the pause button every few seconds during busy battles. If C2:BFE had put this one thing right, it would have instantly validated itself. Because it doesn't - troops still need to be carefully chaperoned through combat - the sizable haul of new campaigns, factions, units, and historical scraps isn't nearly as appealing as it might have been.

Actually, even if GSC had sorted out the military micromanagement issue it would still be difficult to get really excited about much of the new content. Take the three new playable powers - Spain, the Confederation of the Rhine, and the Great Duchy of Warsaw - for instance. As these are all European factions and the developers like their history straight and reverential, no particularly exotic or interesting units appear in the debuting armies. The extra cavalry, cannons, and light and line infantry might have different-colored uniforms and slightly different stats, but they are still cavalry, cannons, and light and line infantry. Perhaps if the expansion had shifted focus away from the Continent to one of the many asymmetrical conflicts that raged in Asia, Africa, or America during the early years of the Nineteenth Century, then there might have been more room for novelty. Maybe if the devs had taken inspiration from last year's other Napoleonic extravaganza, Imperial Glory, and cultivated their sea skirmishes (Naval combat was virtually non-existent in C2) then this pack would have generated a bit more enthusiasm.

In place of adventurousness, GSC has opted for unimaginative generosity. Each of the trio of new powers plus France get their own linear campaign of four historically-derived missions. These lack presentational tinsel like cut-scenes and characters, but are constructed expertly enough to warrant completion. The added nations also get to participate in the Battle For Europe - a more ambitious campaign mode in which battlefield encounters are triggered by army movements on a compartmentalized Continental map (see screenshot). While this game style doesn't have quite the geographic scope or the diplomatic subtlety of its equivalent in Imperial Glory, there are many worse ways of wiling away an unseasonably dreary August afternoon. Once you've got used to the odd bug, the absence of fleets, and the fact you can only move one army around the strat map (a very silly restriction) it's dead easy to get sucked-in. Each dynamically generated battle usually has its own tempting optional sub-objectives that bring rewards of recruits or supplies; the cleverly integrated economics mean you're constantly keeping an eye on your granaries and coal stocks; the core army system encourages thoughtful use of nervous recruits and cucumber-cool veterans. It all gels rather pleasingly.

On the battlefield, even with compulsory babysitting of musket units, C2 and now C2:BFE does offer something quite special. Morale, fatigue, and formation use - three elements usually associated with hardcore turn-based wargames - are all right at the heart of the combat model giving battles a distinctive credibility that's a world away from the contrived rock-paper-scissors scrimmages you see in many a modern RTS. Outside of the configurable skirmish games and a few of the linear campaign episodes, economic development takes the form of seizing neutral villages (each one is associated with a different resource type) rather than building a thriving base from scratch. For an era when armies were expected to live off the land, this device fits beautifully and means battles tend to be a lot more dispersed and unpredictable than they might otherwise be.

The AI has its blind-spots especially when its tramping armies around the strat map, but does pretty well on a tactical level. CPU-controlled opponents seem to understand flanking, they usually use formations fairly sensibly and know when to close-in for an attack and when to fall back. In large historical scenarios like Waterloo, Borodino and Leipzig, failings are more noticeable, but you are still guaranteed a stiff challenge and an impressive spectacle most of the time. Shame that spectacle can't be rotated or viewed at the magnification of your choice, though. With a fixed perspective and only two zoom levels, C2:BFE's hybrid isometric-3D engine feels as dated to this modern strategy gamer as a Brown Bess musket would feel to a modern soldier. 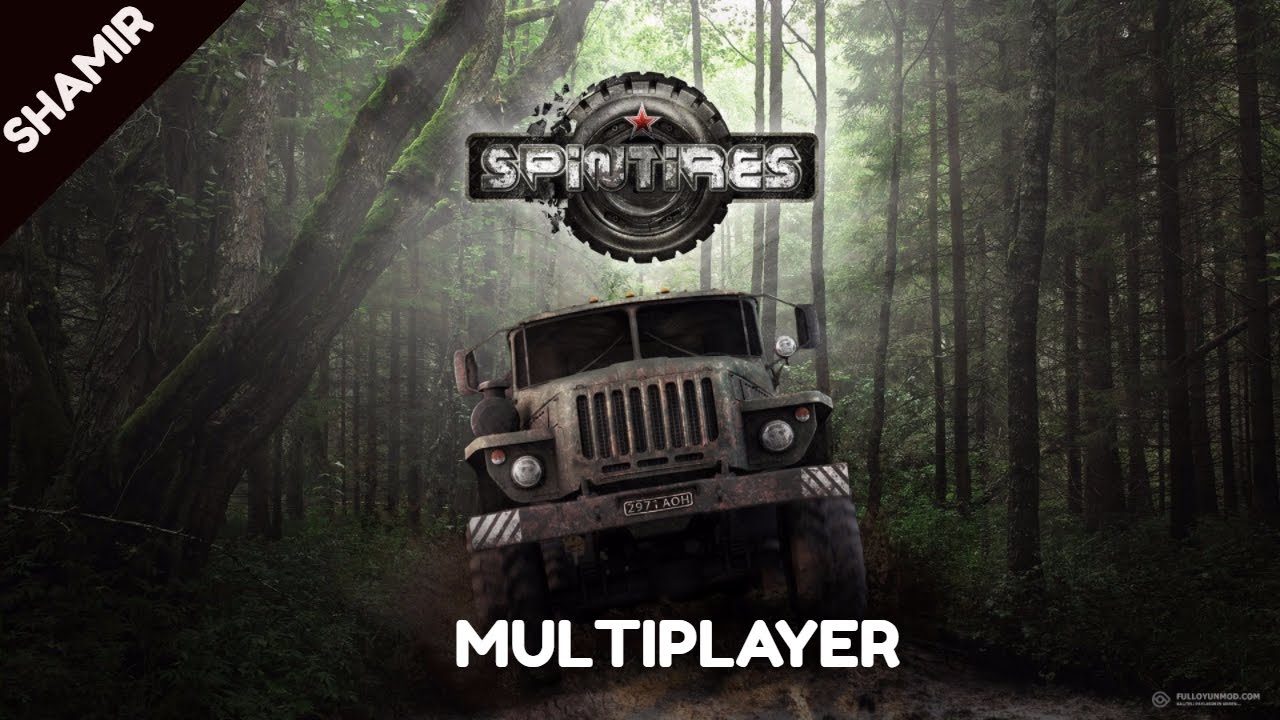