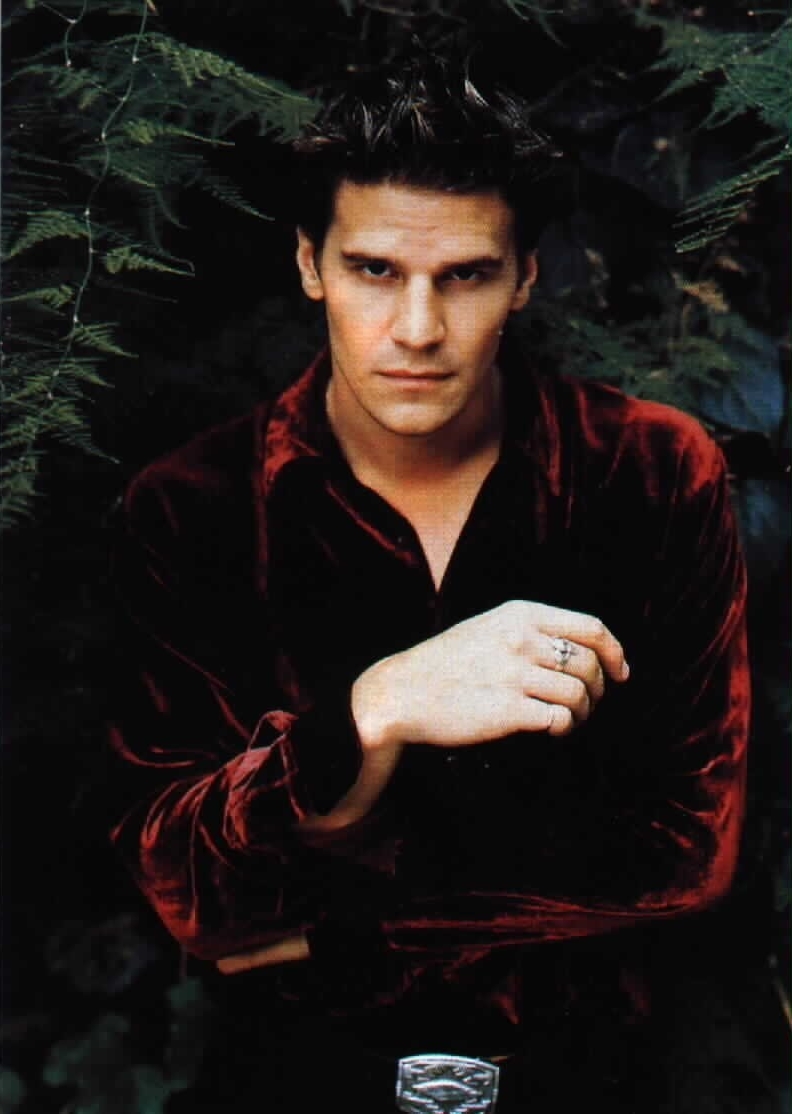 Angel struggles with his growing feelings for Cordelia, Fred's assimilation into the group, Buffy's death, and Wesley's new role as boss. Meanwhile, Darla returns with a surprise for Angel that breaks all the rules we know about vampires. Angel finds out about Buffy's death and resurrection. 'from angel the series'From:Season 2 ep:22 'There's No Place Like Plrtz Glrb'Season 3 ep:04 'Carpe.

'Angel' is the seventh episode of season 1 of the television series Buffy the Vampire Slayer. It was written by co-executive producer David Greenwalt and directed by Scott Brazil. The narrative follows Buffy Summers (Sarah Michelle Gellar), vampire slayer, coming to terms with her feelings for Angel (David Boreanaz), who is revealed to be a vampire cursed with a soul. However, Darla (Julie Benz) is playing a deadly game manipulating both Buffy and Angel to the Master's (Mark Metcalf) will. 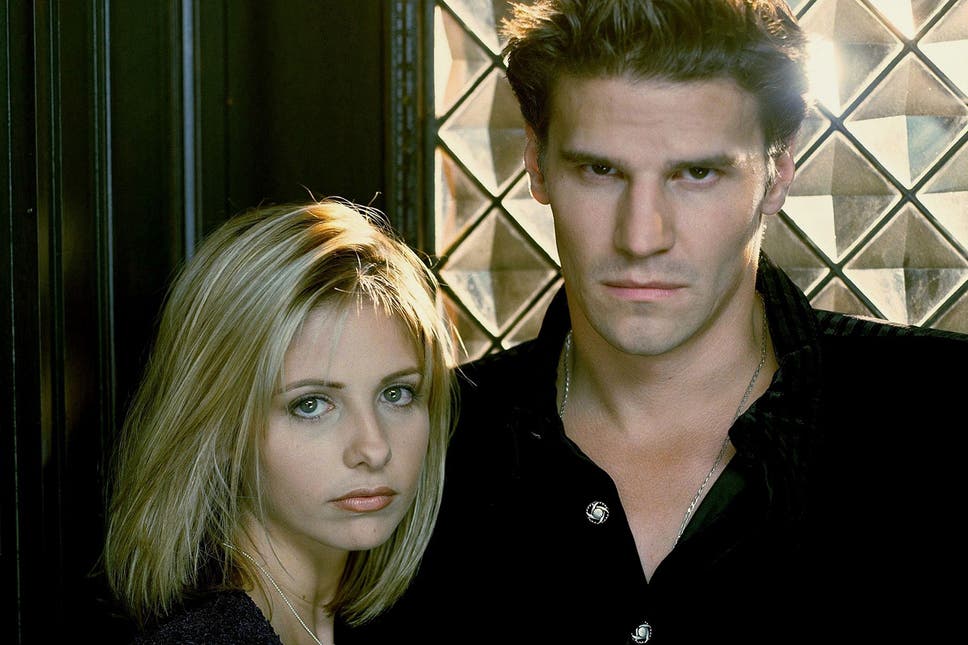 The Master sends a trio of armoured warrior vampires after Buffy. They ambush her, but Angel arrives to help her. Angel is injured during the fight and Buffy invites him back to her house. When Angel takes his shirt off, Buffy notices a tattoo and asks him if he was stalking her, because she felt his presence at the Bronze. He shrugs it off. Buffy asks Angel why he fights vampires and he reveals that his family was killed by vampires.

The next morning, Giles informs the group that the vampire trio were known as The Three, warrior vampires controlled by the Master. The Master allows Darla to kill The Three, as a lesson in the use of power for Collin, the Anointed One.

The next day, Buffy returns to Angel. She notices her diary askew and tries to explain away entries that reveal fantasies about 'A'. Angel assures her that he did not read the diary. He then confesses his attraction towards her. They kiss. Suddenly, Angel pulls back with a snarl of distress, showing his vampire face. Buffy screams in shock and he dives out the window.

Giles researches Angel's history and notices the peculiarity that, although he was previously infamous as the sadistic killer known as Angelus, Angel has shunned the company of other vampires since coming to America and apparently has completely stopped preying on humans.

Darla cons Buffy's mother into inviting her in and bites her. Angel hears Joyce's cry and rushes in. Darla shoves the now-unconscious Joyce into Angel's arms and escapes out the back door. Angel resists the impulse to drink, but Buffy sees him and is horrified. At the hospital, Joyce's last memory is of inviting Buffy's 'study friend' inside. Buffy misunderstands, thinking Joyce means Angel rather than Darla, and storms out to kill him.

Giles talks further with Joyce and learns that it was Darla, not Angel, who bit Joyce. With Xander and Willow in tow, he rushes to find Buffy to warn her of the trap. Buffy tracks Angel to the deserted Bronze and demands an explanation; Angel tells how he was cursed by Gypsies who restored his human soul so that he would be eternally tormented with the guilt of his past sins. He denies biting Joyce, yet confesses wanting to, as well as wanting to kill Buffy. The Slayer lays aside her crossbow and slowly offers her throat to him. Suddenly, Darla emerges from the shadows with a pair of pistols. Hearing gunfire, Giles, Willow and Xander rush in and distract Darla. Looming up from behind, Angel stakes Darla through the heart.

In their Hellmouth lair, Collin consoles the Master for his loss of Darla at Angel's hands. Spying Angel across the crowded room at the Bronze, Buffy goes to thank him — and to tell him goodbye. Their banter trails to silence and they deeply kiss one last time. Buffy doesn't notice that the cross she's wearing — the one Angel gave her weeks ago at their first meeting — was scorching his chest. 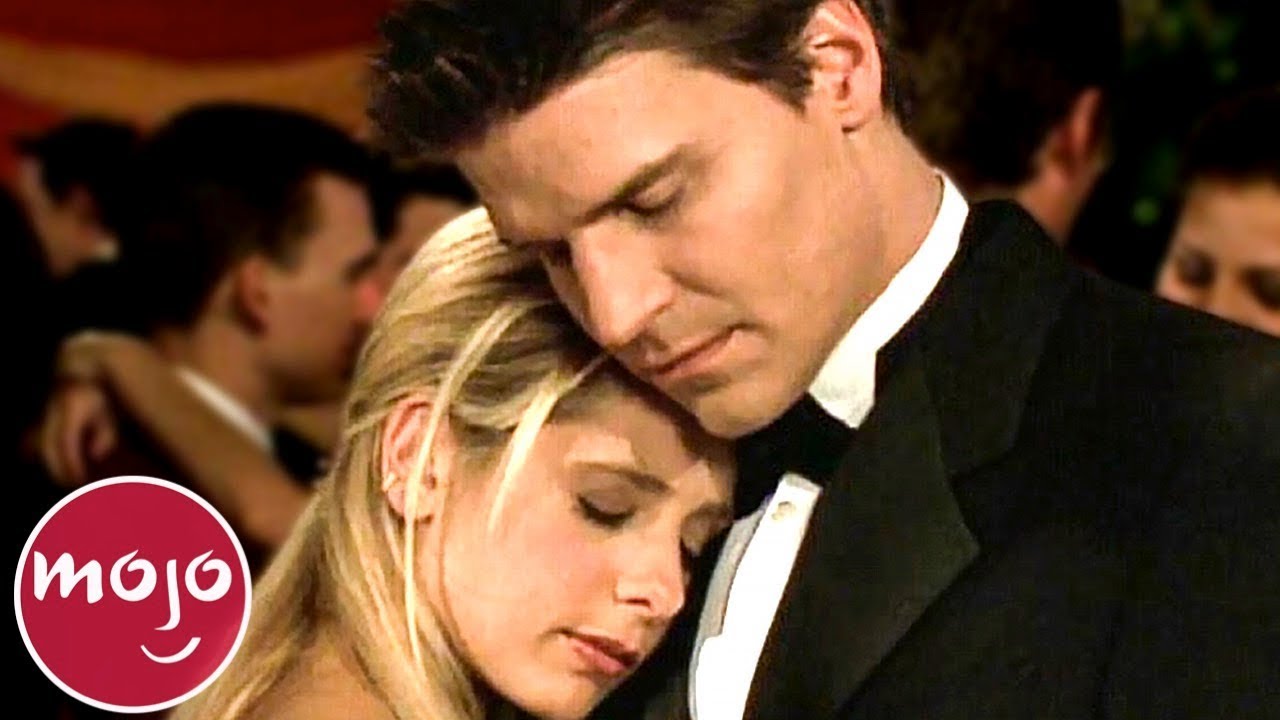 During the production of this episode, it took the makeup department 60 to 90 minutes to apply the vampire prosthetic on David Boreanaz.[1] Angel’s Hugo Boss duster is worth over $1,000.[1]

Noel Murray of The A.V. Club gave 'Angel' a grade of A, calling it the best episode thus far. He praised how Buffy inviting Angel into her home was used as a metaphor, how that 'ambiguity' was used to tease the audience, and the 'multitude of character touches, funny bits of dialogue, and milieu-enriching moments'.[3]DVD Talk's Phillip Duncan called the episode 'excellent', highlighting the 'well-crafted' dialogue-heavy part and the 'poignant ending'.[4] A review from the BBC praised the way the episode was constructed and noted the importance of it character-wise, but called it 'rather mundane'.[5]